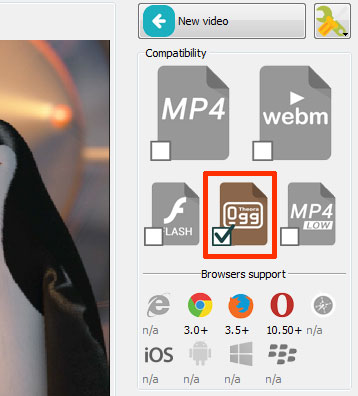 Stranger things have happened. In 1993, a project began to develop an audio compression format. They wanted it to be Open Source and have no complications from patents and had its name derived from a popular game Netrek term “ogging” and became OGG. Technically, OGG is the carrier for the video and audio codecs Theora and Vorbis and it quickly found support and interest in the gaming community in popular games like Doom3, Grand Theft Auto and Halo: Combat Evolved .

OGG was developed as a format with a lossy compression for video and works very well in the Firefox and Chrome browsers and to a lesser degree with Opera. It’s advantage is of course first being Open Source, you have the freedom to develop and modify the program to do what you need or want with it. The compatibility with other formats such as MP3 or AAC along with the size makes it quite useful for developers and designers who are concerned with space.

The complication though, arises with the compatibility that OGG doesn’t have with some systems like most MP3 players, mobile devices and some browsers like Internet Explorer and Safari don’t support it natively so depending on whether your end user/customer uses the latest and best or prefers something older and familiar, you might have a project that they won’t be able to access and use. If you’re not comfortable handing audio conversion or if you’re in a hurry, what would your options be?

The best way to do this is with a file converter that offers conversion options for over 300 video formats with a simple and easy to learn interface. That program is EasyHTML5Video. Drag and drop your video files, make adjustments if needed and one click later, you have a file format that can be used by legacy browsers and devices. EasyHTML5Video has a free version for non-commercial use and a paid version for professional work at a very reasonable price. One business day turnaround support in most cases and an extensive FAQ is available for all customers. Visit http://easyhtml5video.com today and get your video seen everywhere!